Skip to content
Attorney General of the State of New Jersey · One of two pedestrians walking along a railroad track in vicinity of a station was struck by a train.  There was automobile traffic in the vicinity and the pedestrians were engaged in animated conversation.  Using the locomotive involved in the accident, we were able to measure the sound levels of bells and horns, the ambient noise levels at the site, and the noise produced by automobiles.  Based on knowledge of plaintiff’s hearing thresholds, we calculated the distance at which the warning horn was audible and, with knowledge of train speed, the duration of the warning.
Connell, Foley, Geiser, et. al., Roseland, New Jersey · A pedestrian was struck crossing a railroad right-of-way.  The bell on the locomotive was operating at the time.  We were able to advise the attorney for Conrail of the adequacy of the warning.  This was factored into the settlement of the case.
Marvin Barish, Esquire, Philadelphia, Pennsylvania · A worker was struck and killed by a truck backing along a rail right-of-way.  The truck back-up alarm was operating and a train was passing on an adjacent track at the time of the accident.  We evaluated the warning provided by the back-up alarm and that which would have been provided by an alternative back-up alarm.  Warning durations were significantly different for each of the devices.

Attorney General of the State of New Jersey · An automobile driver was injured when struck by a passing train at a signalized grade crossing.  We evaluated the level of the warning inside the vehicle produced by the grade crossing bell and by the train horn.

Attorney General of the State of New Jersey · A pedestrian was struck and killed by a train while walking along the railroad right-of-way.  We determined the time at which the first warning would have been heard as the train passed distant grade crossings.  A binaural audio and video demonstration was produced for presentation to a jury of the actual warning signal levels at the presumed point of impact as the train passed each of the grade crossings.
Corporation Counsel, New York City · A speeding police car struck a passenger vehicle at an urban intersection.  The passenger vehicle struck a pedestrian causing severe injuries.  At question was whether the police siren provided adequate warning to the driver of the other vehicle.  We measured the attenuation of sound from outside to inside on an identical vehicle and the time course of the police siren signal at the intersection.  Based on the speeds of each vehicle, the siren sound levels, and the reduction found by the passenger vehicle, we determined the warning was inadequate to prevent the accident.
Pitman, Pitman, and Mindas, Springfield, New Jersey, Bruce Pitman, Esquire · A worker was injured when a trailer backed over his legs.  We evaluated the audibility of the backup alarm mounted on the tractor that was used to move the trailer.
Shuman, Annand, Bailey Wyant & Earle, Charleston, West Virginia · A motorcyclist was stuck and killed at an intersection by an ambulance responding to an emergency.  At issue was whether the cyclist, operating with illegal “straight pipes” could have heard the ambulance.  We reconstructed the ambulance approach to the intersection and measured sound produced by a similar motorcycle operating with “stock” exhaust and “straight pipe” exhaust.  The level of sound produced by the “straight pipes” masked the ambulance warnings. 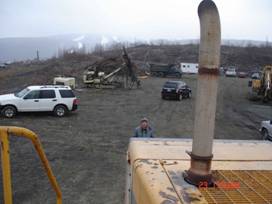 March Hurwitz & DeMarco, Media, Pennsylvania · A utility worker was injured by a moving backhoe.  The backup alarm on the equipment had been defeated by the supplier.  By comparing the level of sound from the machine engine with that from a similar alarm, we concluded that the originally installed alarm was inadequate and its removal did not factor into the accident.