Room Acoustics: The original finishes in the Theater comprised sound-absorbent side and rear walls, resulting in a reverberation time too low for music performances. Popli Group designed new visually-stunning wall and ceiling surfaces comprising wood-veneered gypsum board panels, and OAA assisted with custom and unique angles. The panels provide stiffness for sound reflection and are aimed to provide superb natural reinforcement of sound from the stage. Gaps between panels were deliberately left open to increase the room volume and reverberation time. Operable sound-absorbing banners at the rear of the room tailor the Theater to conditions more suitable for either speech or music programs.

Sound Isolating Constructions: The original Theater ceiling was a continuous layer of gypsum board suspended below lightweight roof construction, providing sufficient control of rainfall noise. The new ceiling panels do not provide similar control of rainfall noise, so a special gypsum board “lid” was designed above the finished ceiling system. This “lid” system was challenging to construct effectively, since it is penetrated numerous times by roof structure, ceiling structure, ductwork, piping, etc. In addition to control of rainfall noise, the “lid” provides necessary control of ductwork breakout noise near the rear of the Theater, where ductwork is close to the mechanical room and before air handler noise is attenuated by duct silencers.

Sound System: The program called for a sound system providing speech reinforcement and successful support of musical theater. The users requested 24 channels of professional-quality wireless microphone capability, 32 channels of on-stage wired input capability, and a digital mixing system that could control this high channel count without the use of input fader layers. These requirements necessitated careful selection of equipment (including re-use of existing analog wireless microphones paired with new digital wireless microphones), as well as careful coordination regarding the space taken by sound system equipment; the installed sound system equipment fills two 65-inch-tall equipment cabinets which incorporates a mixing console system that weighs 100 pounds and is 64 inches wide. Although the Theater sound system was designed with a central loudspeaker cluster on the proscenium centerline, analysis via 3D acoustical modeling software indicated that the relatively low ceiling in this space also necessitated three mid-house fill loudspeakers in order to provide even coverage to all seats. The opening at the Control Balcony has no glazing and is protected by a roll-down grille, remaining acoustically open at all times.

HVAC Noise and Vibration Control: Pre-renovation sound levels in the Theater house ranged from NC-37 to NC-40. All existing ductwork outside the mechanical room was replaced with new, acoustically-lined ductwork, sized for low airflow noise and incorporating silencers. The existing air handler and ductwork within the mechanical room were re-used. Post-renovation, sound levels in the house range from NC-26 to NC-31, providing a significant reduction in sound levels.

Room Acoustics: Sound from speech and music on-stage must be understood clearly by the audience. A 3-dimensional acoustical model of the room was developed to assist in selection of finishes and achieve an appropriate reverberation time. The model was used to adjust the angle of the forward portions of the sidewalls and ceiling planes so as to better direct sound into the seating areas at the rear of the orchestra and the front of the loge. The model was also used to select among multiple options for seating rake and balcony height in order to optimize room acoustics.

Concert Shell: Since the auditorium has a tall fly tower and large wings, both of which absorb on-stage sound, a concert shell was designed and specified so music performance sound can be directed into the audience seating and not lost to the fly tower and wings. A Wenger Diva shell was selected, incorporating an aesthetically-pleasing wood finish that matches the characteristics of the rest of the auditorium; full reflector coverage at the stage sides, rear, and top; and air mover technology to efficiently store the shell during theatrical uses.

Sound Isolating Constructions: Special constructions are needed to separate the auditorium envelope from the mechanical equipment space as well as music and dance spaces. It is also necessary to keep sound from circulation spaces out of the auditorium. Appropriate partition construction methods were recommended, and all entry points comprise vestibules with two sets of doors.

Sound System: A sound system that provides speech reinforcement and successfully supports musical theater is necessary in a large auditorium. In addition, the principal of this school requested a method to simply override most sound system components, allowing sound system usage from a designated microphone input that bypassed the main mixing console. A system was designed that incorporated multiple wired inputs, 16 channels of wireless microphones, a 32-channel mixer, and the requested single-channel override. Output is via four full-range loudspeakers aimed to cover the orchestra, loge, and balcony, a subwoofer, and four stage monitors. The loudspeakers are mounted centrally above the proscenium, just forward of the first catwalk, providing line-of-sight to all audience seating and to the control room mix location under the balcony.

HVAC Noise and Vibration Control: Ostergaard Acoustical Associates developed an appropriate background sound level criterion that supports speech intelligibility over the large distances that exist in this auditorium. Preliminary recommendations were provided to the mechanical engineer to achieve the quiet NC-20 criterion. As the design progressed, specific noise control recommendations were made. Due to the use of large ductwork and open-ended ducts instead of traditional diffusers, post-construction measurements confirm that the NC-20 criterion was achieved, and no adjustments to the HVAC system were necessary.

“The acoustics are terrific!” — Yo-Yo Ma 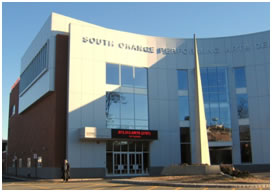 SOPAC was an acoustically challenging project. In addition to a site adjacent to an elevated New Jersey Transit Railroad, the program called for a large multi-purpose room above the 415-seat live theater, with limited budget. Ostergaard Acoustical Associates provided acoustical consultation to achieve a first rate performance space that meets the needs of the community and Seton Hall University. Our consultation addressed intruding train noise and vibration, room acoustics, sound isolating constructions, and HVAC noise and vibration control.

Train Noise and Vibration: Initially, we evaluated the potential of audible noise from train vibration passed through the ground. Pre-construction vibration measurements provided the raw data. Our analyses indicated that soil conditions reduced the vibration sufficiently so that radiated noise into the theater would be acceptable. Train noise would seldom be audible, and only at very low levels.

Live Theater Room Acoustics: The sound of speech and music performances needs to be clearly and correctly heard by the entire audience. Working with the architects Rothzeid Kaiserman Thomson & Bee, side wall shape and ceiling clouds were selected and oriented to provide reflections for natural sound reinforcement, diffusion to eliminate harshness, and surfaces that control flutter echo. In addition, other finishes were selected to control echo and temper reverberation.

HVAC Noise and Vibration Control: Ostergaard Acoustical Associates collaborated with DVL Engineers to achieve appropriate background sound levels in the live theater. The first step was to establish noise criteria that balanced the conflicting needs for audibility of performances, inaudibility of train passes, and budget constraints. Preliminary noise control recommendations were provided to assist DVL in developing the mechanical design. The initial design was analyzed to determine to what degree the noise criteria would be met, and the noise control features were refined based on these analyses. Following construction, field sound measurements were made and, where necessary, systems were adjusted to meet HVAC sound goals.

Sound Isolating Constructions: Special wall constructions and sound isolating doors were recommended to control the penetration of train and street noise, as well as plumbing and other noise sources within the Center.