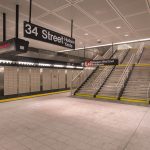 As part of the Hudson Yards Redevelopment Project, the New York City No. 7 Subway line was extended 1 mile from its previous terminus at Times Square to the new Hudson Yards subway station located at 34th Street and 11th Avenue. OAA consulted on the interior acoustics of the station (including sound-absorbing finishes for overall reverberation control as well as local control of train air conditioner and wheel noise), loudspeaker location and selection for the public address system, control of interior HVAC system noise in the station’s occupied spaces, and control of exterior HVAC system noise to nearby receptors.

An expansion of the Panama Canal allowed larger ships to reach the east coast of the United States, but these larger vessels would not fit under the existing Bayonne Bridge connecting Bayonne, NJ, with Staten Island, NY. The Port Authority initiated an ambitious engineering project to raise the roadbed of the bridge about 60 vertical feet while retaining the primary arch structure. The increase in roadbed elevation necessitated extensive new construction, removal of the old roadbed, and extension of the vertical transition roadways much farther into the surrounding neighborhoods. OAA was engaged to act as the project’s Noise Control Officer. Responsibilities included predicting construction noise, making field visits to evaluate progress and verify noise mitigation, developing potential solutions for noise control, and training construction personnel on the use of sound level meters. Proximity of residences to the construction zone led to challenging noise control situations. 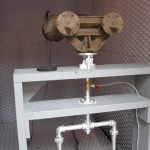 In 2006, the Federal Railroad Administration (FRA) modified Rule 40 CFR 229.129 in response to complaints from residents in proximity to railroad grade crossings. The modified regulation constrains train horns to a minimum of 96 dB(A) and a maximum of 110 dB(A) when measured 100 feet from the front of a train. This required Metro North Railroad (MNR), serving NY, NJ, and CT suburbs, to test 700+ horns prior to June 24, 2010. OAA was engaged to facilitate the test process, educate MNR personnel on accurately using sound level meters, and oversee the approach to meeting requirements. Selection of a suitable test location proved difficult, since Rule 40 CFR 229.129 requires no reflecting surfaces within 200 feet of the locomotive. For MNR’s territory, with many tracks located along waterlines or in dense areas of development, there was a single location at one service yard that was suitable. This location experienced interference from passing trains and pedestrians, and required that test personnel operate on tracks served by an electrified 3rd rail. As testing began, it drew significant complaints from residential neighbors regarding the nuisance of horn noise, and there were even concerns that the prolonged blasting of train horns was mistaken for emergency warnings from the nearby Indian Point Energy Center nuclear power plant. OAA worked with MNR to develop a sound-absorptive horn test chamber where horns could be tested off of locomotives and tracks, in a sound-isolating enclosure. OAA also worked with the FRA and the American National Standards Institute to develop ANSI Standard S12.69-2010 Procedure for Testing Railroad Horns ex-situ. Application of this standard allowed MNR to test the remainder of their fleet’s horns in a safe and efficient manner. 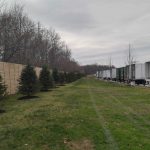 OAA often consults on logistics distribution facilities and warehouses that involve the need to move material goods on- and off-site using heavy trucking, box trucks, and/or personal vehicles. OAA has extensive knowledge regarding the sound levels of all types of logistics vehicle noise, including sounds from movement, coupling, air brake release, and idling. OAA assists clients with predictions of vehicle noise, provides recommendations for noise control in the form of barriers or berms, develops commentary regarding potentially beneficial changes to site layouts, prepares written reports of our findings, and is available for expert witness testimony at planning and zoning board meetings to support applications.